The Bergen County Soccer Officials Association will be offering a Cadet Class for individuals interested in becoming certified High School soccer referees beginning Feb 10 in Maywood.  The class fee is $150 and will be held on six consecutive Monday evenings except Feb 17 (President’s weekend).  For information, contact Keith Breznovits at 973-334-4624 or www.bcsoa.org.

LEADERSHIP AT ITS BEST

The 2019 Top Players in Bergen County

Acosta - Bergenfield
Andres ACOSTA - Bergenfield -  This center mid-fielder works hard on and off the ball.  He controls the middle of the park for the bears and does so with authority.  He initiates the attack by winning tackles and fights for 50/50 balls. His efforts and enthusiasm ignites the team, and his control is masterful at making everyone else around him better.
​
Mike FRANK - Indian Hills -  Mike Frank had an incredible year to cap off his Braves career.  A three year varsity player, Mike anchored the defense to a respectable 1.5 Goals Against Average.
​
Derek ERNST- Mahwah - Derek has led the team offensively with 12 goals this season. As a captain, he has led by example and shown grit and toughness on the field.

Edson ALMEIDA - Cliffside Park - Edson is one of the captains and leaders this year at CP.  He is one of the biggest reasons they're as successful as they are, he's tough to defend, he's an amazing two way player, and has great vision.  He led the team in assists the past few seasons and was one assist shy of the school record last season.  He was also the 2nd top scorer on the team showing his ability to work hard in every aspect for his team, and its his efforts and abilities that makes this clever player one of the best on a team filled with talent.
​
​Wouter SCHUIT- Park Ridge - Wouter has started most of his games in CB. Wouter came into the season transitioning into the back after a full year contributing in many ways to Park Ridges first league title in history last season . Wouter played some Forward and Center Midfield in his Junior season, and this year as a Senior he has performed strongly in the back. Wouter had great showings against Hawthorne Christian and stood strong in the Bergen County Tournament game against Lyndhurst. He is a hard worker, great teammate, and he is a player any coach would love to have. 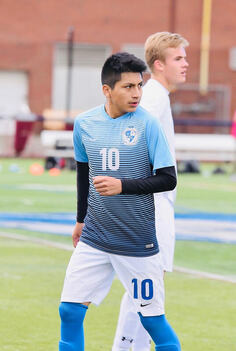 Andy Quituizaca - Wood-Ridge
Andy QUITUIZACA - Wood-Ridge - Andy has been a pillar of this program since the day he stepped foot on the practice field back in the summer of 2016. Andy is and has been the ultimate warrior on the field despite his limitations in stature. However, where he lacked in stature, he outclassed everyone with his heart, work rate, passion, dedication, and play. He is a grinding central midfielder charged with the task to win 50/50 challenges, get bruised, dirty, and bloodied and usually a forgotten player after our wins because he does not show up on the stat sheet. But, as his numbers show, Andy has been a testament of longevity and success.

​Aiden MONAHAN - Bergen Catholic- Aidan is a shutdown centerback that organizes the back line.  He's really intelligent on the ball and can play out of the back with ease, even in the toughest situations.  He rarely misses an opportunity to win a 50/50 with his head, and his communication with the team is a main reason that BC is so strong in the defensive third.  He's one of the biggest reasons BC is 10 - 0 on the year.

Henry Gomes - Rutherford
Henry GOMES - Rutherford - Henry is the engine in the Rutherford midfield.  His pace, work rate and athleticism make him difficult to play against while his vision and game IQ allow him to play a role of provider for his forwards and wingers.  He's a true leader on the team, and one of the top midfielders in the league.

Thomas TRIMBLE - Emerson - Thomas is a sophomore midfielder who has really come into his own this season after seeing very limited varsity time as a talented freshman.  His a hard worker and two way player who lets his play on the field do all of the talking.  With points in 6 of Emerson's last 7 games, Trimble leads the way for the 10-4-2 team with 10 goals and has tacked on 5 assists.

McElduff - Old Tappan
John HOPPE - Pascack Hills - Although he often adds a much needed spark to our offense, once he took over at sweeper he solidified the defense and probably saved as many goals as the keepers.  He shows tremendous poise as a sophomore, with a great vision and and a deft touch.

Kieran McELDUFF - Old Tappan - Kieran is a 3 year varsity player and 2 year starter as the Golden Knights Goal Keeper.  His performances this fall has led the KNights to 10 shutouts despite playing 14 underclassmen and having no seniors play in the back row.  Kieran's leadership has been phenomenal and hopefully carries over into the post season!

Enrique Mutsoli - Lyndhurst
Enrique MUTSOLI - Lyndhurst - Enrique is a sophomore and has quickly developed into a very hard working, committed and dedicated players in our program. His passion to succeed And desire to play the game he loves is second to one.  Enrique has worked hard in the off season to get stronger and smarter on and off the field.  He is the first to boost his teammates morale and is always looking for new ways to improve his teammates on and the off field.  Enrique has a bright future ahead of him and is far ahead of last season.

Hector CAMAJA - Palisades Park -  Pal Park captain Hector Camaja has been a force for his team as the starting goalie.  He's one of the best goalies in the group and has regularly proven his abilities throughout his career at Palisades Park.  This season he broke the Pal Park record for the most wins by a goalie with 24.  The program will surely miss his talents and leadership next season.

2019 Cadet Class
for individuals interested in becoming certified High School soccer referees beginning Sep 10 in Maywood.
​The class fee is $150 and will be held on six consecutive Tuesday evenings.
​For information, contact Keith Breznovits at www.bcsoa.org.
GREAT READ:  Here's an article from the Harvard Business Review on MANAGING YOURSELF that applies to ALL OF US.  LINK: ​If You Want to Get Better at Something, Ask Yourself These Two Questions

Check out the officials web page for information on how to be the next great referee!  www.bcsoa.org.
Check out our Morris County Boys Soccer Coaching Friends at: mcbsca.org
​bcbsca